Hello World! At Oteemo we like to automate things. One of the tools that we use for automation is Ansible and a question that we often are asked is, “How can we develop and test our Infrastructure as Code?” In this series, we will build out a Ansible Role and discuss the strategies for developing a role with a high degree of confidence that it will perform as expected.

In this first entry, we will touch on the role itself, how we will test, and start the scaffolding.

The Ansible Role that we will develop will handle updating instances and rebooting them when necessary.

We are going to build it out from scratch with tests. This role makes a good example for role development as it uses a number of Ansible topics such as:

When we embed a role that can potentially cause reboots, we will want to make sure that we make some considerations so that reboots only happen when we expect them. Ideally, the roles we use during the provision portion of the lifecycle should be the same as the ones we use in the maintenance phase of the lifecycle. If we are doing immutable deploys, the latter does not apply; however, in many cases a base image will be created for a particular fleet and it will be promoted from lower to upper environments. It is important that we can update and reboot when necessary in a controlled fashion!

Some Thoughts on Testing

Testing does not have to be hard. There are frameworks that can assist with testing. The Molecule framework is one possible solution. I have written about Testing infrastructure with Molecule before.

Since that post, the Molecule project has released version 2. There are some good blogs out there on using the latest versions and perhaps one day I will write about it as well. However, Testing does not have to be hard. The Molecule project is promising, but I have found that it can be more time consuming than I would like. For example, all of my tests broke when we upgraded to ansible 2.5.1. I do like the project and I do continue to use it; however, there are other ways to Make testing happen (pun intended). Setting things up this way also illustrates how to test and that it is not very difficult when it is set up specific to a use case, rather than attempting to be generalized.

I also have been wanting to try out Goss, so we will use that as well.

Because we are potentially rebooting hosts, we cannot test against docker instances. We could use a vagrant solution to automate our testing against, for example, a virtualbox instance; however, I don’t have any bare metal available to run a CI server to run similar tests. We will be using Travis CI to run our tests against EC2 instances. We will want to set this up in a manner where we do not keep any secrets in our repository,

We want our local development to look pretty similar to what our CI Server will look like. That way we can be pretty confident that we will be bringing all of the dependencies to the party. Travis CI is a Ubuntu Trusty container, so we will use a Trusty vagrantbox. Lets initialize a new repository and create one.

You will need to have vagrant installed at this point. We could do a vagrant init ubuntu/trusty64 at this point; however, I prefer just to create a simple Vagrantfile:

We will also need to create a minimal bootstrap script that we referenced in the Vagrantfile.

At this point, we could do a vagrant up. We will also want to make sure that we put an entry for the vagrant metadata in our .gitignore.

We will edit the play so that it invokes the role wherever we test it. On our vagrantbox the role will be called vagrant, and on Travis it will be whatever our repository is called.

As we stated earlier, we want to be able to test this role against EC2 instances, so we will need to support the following test actions:

Note that we do the fast tests first.

We will implement the EC2 and validation stuff later. For the initial commit and proof of concept, we will first implement syntax, lint, play, and idempotence. Fortunately for us there a tool that will facilitate this for us.

Let’s walk through the Makefile:

Set the shell to bash

Set the Ansible version to a reasonable default and allow for virtualenvs that are specific to that version.

Use a variable for the default version of ansible-lint and don’t allow the user to change it from the command line.

Use the default scenario by default and set the order of the stages.

.PHONY in a Makefile just means that there isn’t actually a file target to test. While we should have all our targets as PHONY, Make does not allow implicit rules to be searched for PHONY targets. What this means for us is that we will not declare the scenario specific targets as PHONY so that we may override them later (e.g. we will need to create a rule that skips the idempotence check in a scenario where a reboot is requested). What it means is that we cannot name any files in our base directory something that matched the targets, or else Make will not do what we want.

Here are the dependencies for the different stages that we have defined.

Finally, a clean target to remove some files that we might create.

Now we have enough scaffolding to test on our vagrantbox. Let’s do a test run. 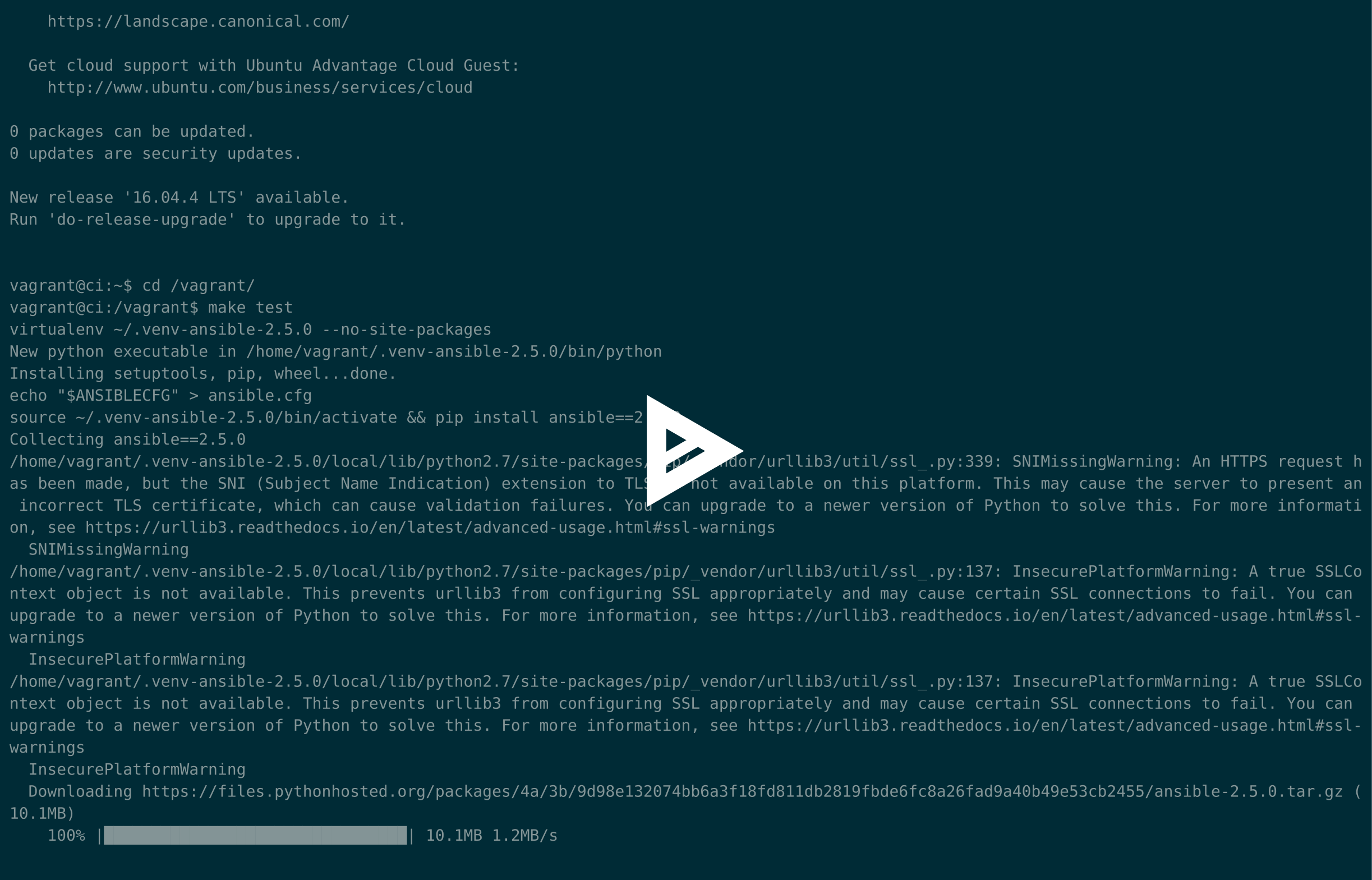 We can create a very simple .travis.yml using the same scripts that we used with our vagrantbox.

Now we create a repository on Github, and connect it to Travis CI. Commit, push, and test.

That is enough for today. In part two we can discuss the creation and destruction of assets.